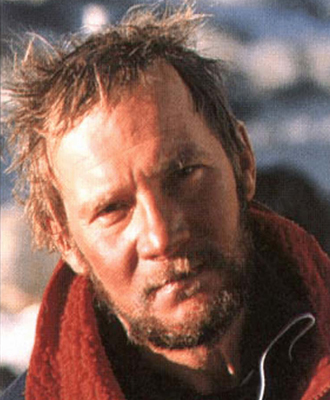 Terzy ‘Jurek’ Kukuczka died on 24 October 1989 when he fell near the summit of Lhotse (8516 m) while attempting a first ascent of the S face. He was one of the greatest Himalayan climbers of all time and he placed the Polish flag on all fourteen 8000 m peaks.

Kukuczka was born in Skoczow, Beskid Slaski, Poland, on 24 March 1948 and was educated in his local school. He became an electrical engineer and worked in the coal mining industry in 1965 he started to climb in the Polish Tatra mountains and became a member of the Katowice High Mountain Club. He climbed the most difficult and demanding routes in the Tatra, both in summer and winter, and did some superb climbs. Then he went to the Alps, the Dolomites, the Hindu Kush, the Karakoram and Tibet. In recent years he climbed almost exclusively in the Himalaya. Kukuczka climbed all fourteen 8000 m peaks, as did Reinhold Messner before him, but, unlike Messner, Kukuczka climbed all but one by new routes or in winter.

It had been Kukuczka’s ambition to set up new routes on all fourteen eight thousanders, either in summer or in winter. He climbed all but one of them without oxygen; it was only on Everest that oxygen was used for part of the way up to the South Summit. He achieved ten 8000 m peaks by new routes, climbed Makalu solo, and made four first winter ascents. No other high-altitude climber has matched that record.

Kukuczka’s stamina and strength at high altitudes were phenomenal. He acclimatized slowly but, once acclimatized, he was able to survive for very long periods at high altitude, if necessary without food or drink. An extremely strong climber, he reacted well to danger. He preferred to climb in ‘alpine style’, if possible by new routes or in winter, in a small team and without oxygen.

The most important first ascents made by Kukuczka were Everest by the South Pillar (1980); Makalu solo (1981); Gasherbrum II and I (1982) with Wojciech Kurtyka; Broad Peak – the first traverse ofthe massif of three peaks (1983), also with Kurtyka; Dhaulagiri and Cho Oyu (1985), first winter ascents and in the space of three weeks.

Kukuczka’s ascent of Kangchenjunga in winter (1986) and then the first route on K2 via the South Wall were among his most remarkable climbs. In 1987 he finally completed all fourteen 8000 m peaks. He himself once said that his favorite and most satisfying climbs were Makalu and K2. When he reached the summits of these mountains, beside leaving the Polish flag, he often left little mascots or souvenirs from his two sons.

In 1988, with Artur Hajzer, Kukuczka established yet another route on Annapurna, via the almost 2000 m high right E buttress of the S face. Over the years, he made several outstanding climbs with his close friend and longest serving partner, Wojciech Kurtyka. He also climbed with Czok, Pawlowski, Wielicki, Heinrich, Piotrowski and Hajzer.

Kukuczka received several gold medals in Poland for achieving outstanding results abroad in sport. In 1987 he was made ‘Man of the Year’ in Poland after completing the 8000 m peaks. He also received a crystal trophy from the Polish Foreign Minister ‘for making the name of Poland famous throughout the mountaineering world’. In 1988 he was awarded an honorary Olympic silver medal by the Winter Olympic Committee in Calgary.

Kukuczka was a wonderful husband and father of two sons. He was a quiet, modest and sensitive man, religious, dependable, a considerate friend and tolerant in his opinions of other climbers. His magnetic personality was an inspiration to all around him. His loss is a severe blow to his family, to Poland and to international mountaineering. His eternal bivouac is high among his beloved Himalayan peaks, and his memory will remain for ever with those who climb mountains.

I have something inside me that makes me have no interest in playing for low stakes. For me it is the high bid or nothing. That’s what fires me.